The Leadership Team’s Guide to Making the Meta Decision

The Leadership Team’s Guide to Making the Meta Decision

This post is excerpted from the article Making Decisions in Meetings, originally published on the Lucid Meeting blog.

Making good decisions is one of the leadership team’s primary job responsibilities. But decision making is tricky stuff. Recent research by cognitive and behavioral scientists shows that the way individuals make decisions is far from logical, and it doesn’t get any easier when you get the group involved.

Even then, making a decision is just the start. Decisions should lead to action. The process used to arrive at a decision has a big impact on both the quality of the decision and the team’s commitment to the follow-up action required.

When a leader identifies a decision that requires group involvement, either to make the decision or to carry out the actions that follow, what process can they use to get the best result?

The Meta Decision is deciding how to decide. To figure this out for the decision at hand, ask:

What kind of decision is this?

Determine whether the decision is risky or especially rewarding, and if the situation is simple, complicated, or complex.

Who has the authority to make this decision?

Who needs to commit to this decision for it to succeed?

Decisions lead to action. Some actions can be completed by the person making the decision; most require cooperation from the group.

Do you have or can you quickly determine viable options?

Before you can discuss the pros and cons of different options, you have to understand the real problem you’re solving and have some options to discuss. Some issues are too complex or too sensitive to work through all this during the meeting in real time.

Here’s an illustration of making the Meta Decision. 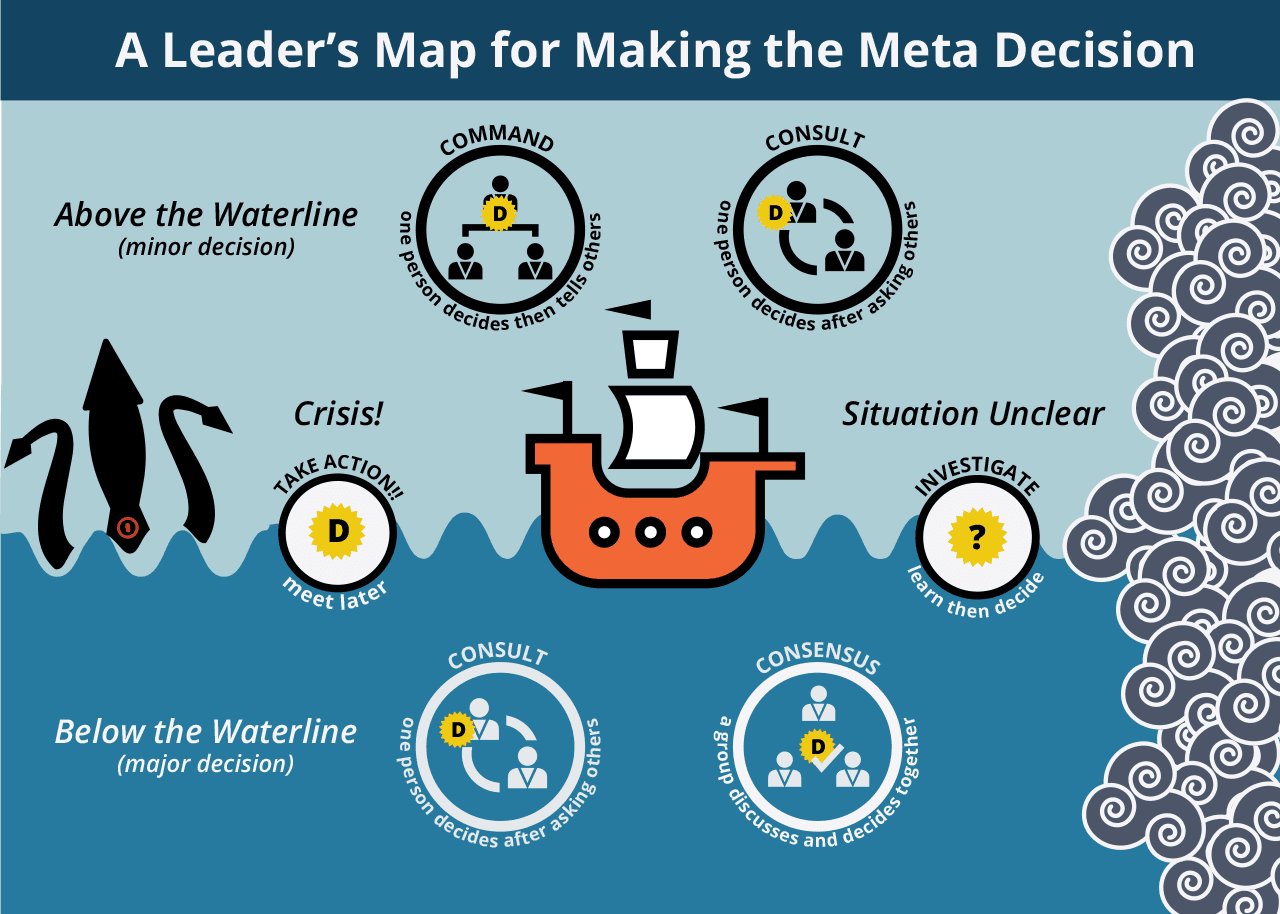 The answer to the Meta Decision is:

You see that Consult appears twice on the illustration? That’s because the Consult decision-making process works best for most leadership teams most often.

“Who’s got the decision here?” starts a Consult decision meeting. Naming a specific decision maker in this way:

There is both a science and an art to making decisions, and we’ve only scratched the surface here. To begin with, share this article with your team and bring some clarity to your decision-making meetings. When your team recognizes and can talk about how a decision will be made, they are much more likely to arrive at a quality decision.

About the Author: Elise Keith

Elise Keith is the founder of Lucid Meetings, a company working to transform what it means to run successful meetings in the digital workplace. She lives in Portland, OR USA with her three children and husband co-founder.

Contact us to discuss your meeting or facilitation needs.